The synthesis of energetic, non-nuclear materials for military and space application has been a long term goal in our research group. Some of the current challenges that face energetic material scientists are:

In general, the survivability increases with: 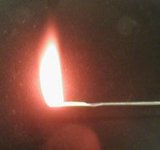 Modern nitro compounds such as CL-20 or the recently reported hepta- and octanitrocubanes possess very high densities and enhance the energies utilizing substantial cage strain. Members of the second class of compounds are 5,5’-azotetrazolate salts which show the desired remarkable insensitivity to electrostatic discharge, friction and impact while having a very high heat of formation (Fig. 2, 3).

Our research group developed the synthesis and characterization of

which are new members of the second family which derive most of their energy from their very high positive heats of formation (Fig. 2 and 3). 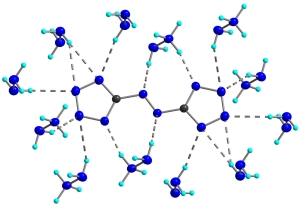 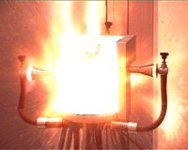 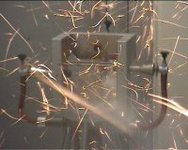 Several approaches are being pursued to provide new energetic materials to meet the challenges of the future. One approach is the synthesis of all-nitrogen or nitrogen-rich energetic materials. Support for work in this area has been provided by the German Federal Office for Defense Technology and Procurement (BWB), the Bundeswehr Research Institute for Materials, Fuels and Lubricants (WIWEB), the US Army Research Laboratory (ARL), the European Research Office (ERO) and the US Navy (NSWC, Indian Head).

The expected advantages of nitrogen-rich and all nitrogen compounds include:

It is still too early in the development of such materials to assess whether they will live up to their potential, but nonetheless they represent a very exciting and challenging new area of chemistry.

Recent modeling has shown that the presence of high concentrations of nitrogen species in the combustion products of propellants can reduce gun barrel erosion by promoting the formation of iron nitride rather than iron carbide on the interior surface of the barrel. Thus, compounds such as guanidinium azotetrazolate (C4H12N16, see above, cf. Fig. 2) show promise for use in low erosivity gun propellants.

Other highly energetic compounds which were developed in our research group at LMU include: 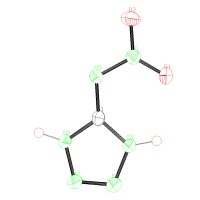 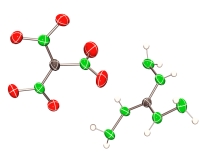 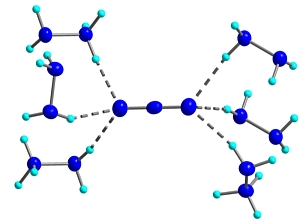 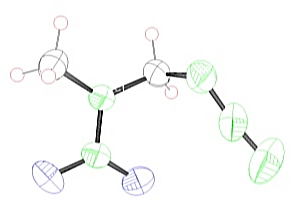 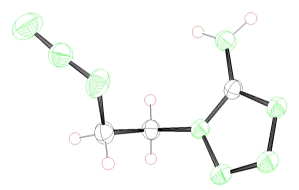 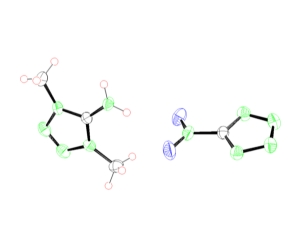